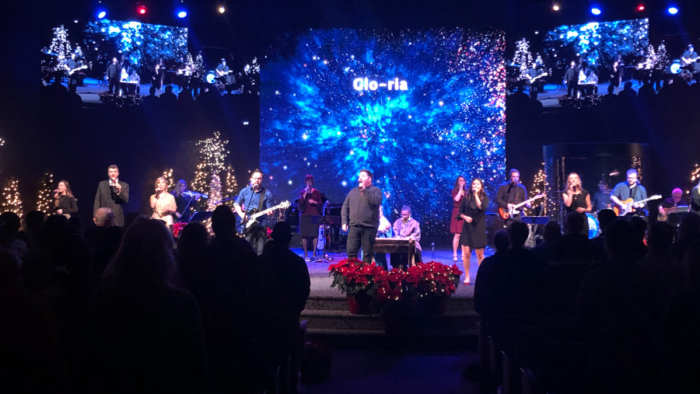 Churches like Cedarview Community Church in Newmarket all tend to run into similar problems. Over time, the equipment ages and becomes unreliable or just outdated, and the church needs to look at modernizing and replacements. In some cases, the church ran into emergency situations where gear needed to be replaced immediately.

As an integration contractor, we set up a “Stewardship Approach”, which allows churches to plan for the natural evolution for failure and obsolescence, and allows us to identify and plan for replacement equipment before it reaches a fail point. For example, we installed the previous replacement for the church’s old dual projector system, including providing three EIKI LC-W5 widescreen projectors – two for the main sanctuary and one for the South Sanctuary. The single projector in the South Sanctuary became the fail-safe replacement. If there was a failure of one projector in the main sanctuary, the matching unit in the South Sanctuary becomes the backup, eliminating the cost to install two new matching projectors.

We try to maximize the ministry budget in every way possible to minimize emergency expenditures and “panic purchases”, and maintain a level of uninterrupted technical excellence during worship. This also requires us to work closely with leadership to understand their vision for the church, so we can plan for the future and purchase equipment accordingly. For example, the recent Blackmagic video mixing system and new signal processors were installed before upgrading the aging projectors to allow the volunteer operators to become familiar with the new processes before a major changeover in projection technology.

We recently installed a nearly 60 foot wide LED screen in the main sanctuary; with a height in the middle of 18 feet, and on either side about 10 feet high. The screen is also curved to create 3 flat sections, due to the nature of the fan shaped room. As part of our stewardship program, we knew we were getting close to having to replace the projectors, and the decision was made to convert to LED video wall technology. We met in early 2018 to discuss ideas, and by March we were able to order the LED display and its processors. While manufacturing of the display was underway, we were able to start ordering other parts of the system, including Blackmagic Design’s ATEM video mixing system, running new SDI video feeds to the sanctuary and the South Sanctuary, and adding a back trusses with eight Chauvet XLI360’s and four Colordash HEX IP’s, along with some front natural lighting from Elation Chorus DWs.

Cedarview’s sanctuary seats 1130 people in noiseless, theater style seats that we installed nearly 10 years ago, and conducts morning and evening services. During special events, when the main sanctuary is at maximum capacity, the South Sanctuary becomes the overflow room, seating another 300. The Worship Team includes about 25 people on the stage – eight to ten worship singers, plus the musicians (3 guitars, horns, strings, drums, piano and keyboards), so sight lines for the screen were factored in before we designed it, and played a role in the decision to extend the center screen to the floor. The production team uses the new Clearcom system to keep in constant communication.

Since the platform is concrete and the proscenium is wood, we also reshaped and reinforced the platform to eliminate noise, and relocated the Baptistry from behind the new center screen, replacing it with a custom-built tank which can be rolled out onto the platform as needed.
We found it was more efficient to have our LED screen custom built to our clients’ specs, which allowed us incorporate the curvature we needed in our design. Our display manufacturer also works with us to customize our LED displays. We were able to choose heavier UL rated power supplies and a whole variety of little things like the type of mounting hardware, and the connections we needed for our cabling. Even after all that, we still saved money, and eliminated the need for expensive annual projector lamp replacements.

The pixel pitch on Cedarview’s LED wall is 2.8 mm, with the closest seating roughly 20 feet away, allowing for a nice crisp image with high contrast. There is not a lot of ambient light in the sanctuary, but the house lights are always on at different levels, so light bleed on the screen had been a serious problem for projectors. However, with the LED wall, we only need to run at 40% brightness to eliminate any outside lighting issues. This will also extend the operating life of the display by a huge factor.

The wall was installed in late August within a two week period, without affecting the Sunday in between, and officially unveiled in early September for ‘Kickoff Sunday’. Everyone was blown away by the huge improvement made, especially for the seniors who struggled with the projectors’ constant battle with house lighting, and everyone else that appreciates the stunning color vibrancy only available from LED displays. Because the screen is so much bigger, the text size can be larger and easier to see, and the colors are superior. As well, we transitioned the pastors to a new iPad app for onscreen notations called “Preacher’s Whiteboard”, which we designed to overcome many of the problems of using a regular iPad app in a live environment (The app is available for iPad on the App Store. Search for “Preachers Whiteboard)

Through stewardship-based planning over the last 10 years, Cedarview has upgraded to 96 channels of Allen & Heath digital mixing, SLS line array speakers, and a completely “silent stage”. The various components are synchronized with a Control4 Automation System, allowing the Tech Team to start up and shut down everything without dozens of switches and buttons being manipulated.

The whole ongoing project provides high value with high quality and ease of operation, and still comes in at lower cost than many equivalent systems. Knowing that this stewardship approach helps our church clients with their missions responsibilities is a blessing.

Made with ❤ by: Peashooter Media